General notes and total statistics for the end of the season on a select handful of prospects from the Laval Rocket.

Welcome to the 4th edition of “Notes” on Montreal Canadiens prospects in their respective leagues. Below are general notes and total statistics for the end of the season on a select handful of prospects from the Laval Rocket.

C Alexandre Alain is a solid two-way pivot who provides high energy and a great motor. He’s always involved in the play, forechecking and causing havoc to the opponent’s defencemen. He’s aggressive along the boards always digging for the puck, using his stick to disrupt passes and breakouts. Alain possesses a great wrist shot and can release it rather quickly. He sees the ice well, has decent playmaking and passing skills. Not an overly dynamic offensive player who doesn’t really drive the offense or create high end plays. A solid skater with good agility, always moving his feet, top end speed is average. Alain recorded 28 points, 8 goals, 20 assists, 38 penalty minutes, a -6 rating and 109 shots on goal in his first season with the Laval Rocket. Alexandre Alain player profile page. 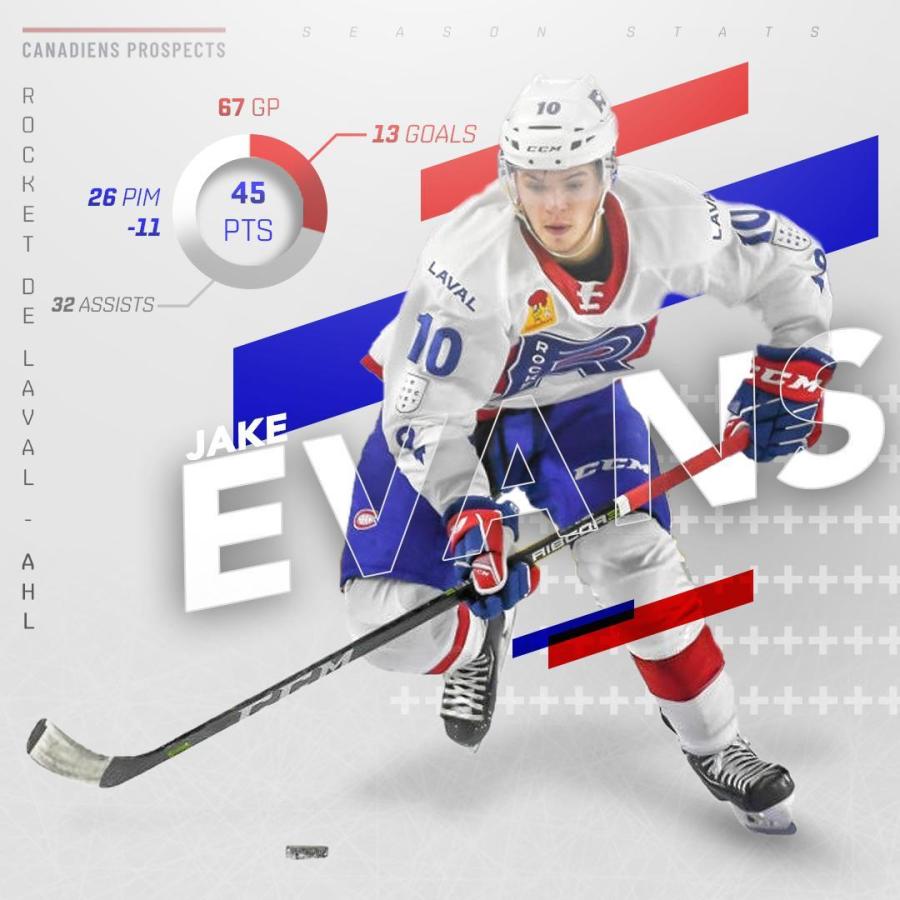 C Jake Evans provides a very solid all-around 200-foot game. He showed he can quickly adapt to different styles of play throughout the season. Evans has excellent hockey sense and vision, not a fleet a foot player but he uses his smarts to get around. He can play with pace and make quick deceptive passes in tight. His passing abilities and playmaking skills are definite strengths which attribute to his great vision. Positionally sound and uses his anticipation to break up plays in the defensive zone. He can protect the puck rather well but will need to work on his overall strength to fend off the defenders. He will also need to improve on the quickness and power of his release. Evans recorded 45 points, 13 goals, 32 assists, 26 penalty minutes, a -11 rating and 110 shots on goal in his first full season in the AHL. Jake Evans player profile page.

C Lukas Vejdemo is a strong smart two-way center who prides himself in his defensive play and backchecking. He’s got a powerful skating stride that allows him to break away from battles and carry the puck out of the zone. His first initial steps are not explosive but he does use his balance to keep possession and fend off attackers. Overall he protects the puck well using his decently sized frame and awareness. He has a pretty heavy wrist and slap shot but will have to work on his accuracy and position of his release point. He’s a good playmaker with decent passing skills and solid vision. He’s a give and go type of forechecking attacker that is always looking to push the pace. Vejdemo’s hockey sense and defensive play are what makes him an integral part of the penalty kill. Vejdemo recorded 29 points, 13 goals, 16 assists, 18 penalty minutes, a +5 rating and 97 shots on goal in his first season on the North American ice. Lukas Vejdemo player profile page.

RD Cale Fleury is developing into a very solid two-way defenseman which was evident during his transition to the professional ranks. He’s a fluid skater with average speed that uses his crossovers and quick turns to stay with the play. He’s positionally sound and uses an active stick to break up plays. A smart defenseman who manages the puck well doesn’t force plays and isn’t afraid to carry the puck even while under pressure. He’s got very good vision, solid passing abilities and is able to hit forwards with long stretch passes. Fleury possess a heavy release both of the wrist and slap shot variety he’s also patient in getting pucks through from the point. He’s a physical defenseman who loves to step up with well-timed open ice hits. Fleury recorded 23 points, 9 goals, 14 assists, 23 penalty minutes, a -16 rating and 85 shots on goal in his first season with the Laval Rocket. Cale Fleury player profile page.

LD David Sklenička is a steady two-way defender with all-around average skills. He can break out using his smooth skating stride or make short quick passes to get out of the defensive zone. He has some decent vision and offensive flair as he doesn’t force certain plays and stays patient even in close situations. He’ll read the play and anticipate safe opportunities to pinch in to extend the offensive zone time. He’s got a good slapshot and a decent overall release that could be improved. He showed he can be physical when called upon especially in front of the net clearing the opposing players. Sklenička recorded 9 points, 3 goals, 6 assists, 50 penalty minutes, a +3 rating and 81 shots on goal in his first season in North America. David Sklenička player profile page.

G Michael McNiven is an athletic goalie with great quick lateral movements. He’s aggressive, plays on top of the crease to cut down the angles and is positionally sound. His rebound control is very solid as he tends to kick out rebounds away from danger or swallow up the loose puck. He could work on his stick handling and decision making. He tends to overplay which sometimes leads to a great athletic save or being totally out of position. He improved on his vision and reading of plays anticipating the correct position. McNiven posted an 11-12-3-2 record with 2.52 goals against average and a .902 save percentage to go along with 2 shutouts in his second season with the Laval Rocket. Michael McNiven player profile page.

The next edition of “Notes” will be focused on Habs prospects from Europe set to release next week.