Featured CPR: The road to the NCAA Tournament is in full force

Featured CPR: Progress continues in the NCAA as the World Juniors come to a close

An excellent playmaker and a pinpoint sniper that is especially dangerous on the special teams. His release is fantastic, he can fire one-timers with good velocity and uses his wrist shot to beat goalies cleanly from anywhere in the offensive zone. McShane’s puck skills are utilized in a variety of ways, he can dangle through multiple defenders and still has the presence in mind to find his teammate off to the side. He also shows off his high end scoring touch either on the break-away or from below the goal line with slick puck handling abilities. His vision and passing abilities are top notch as he’s able to complete timely passes. He utilizes both his forehand and backhand effectively to make crisp high-end plays. McShane’s skating is well below average, in particular, his speed is what holds him back. He displays quality edgework when handling the puck and moving in the offensive zone which helps him escape checks from time to time. He requires much more of an explosive first step and full extension through his skating stride in order to gain more speed. 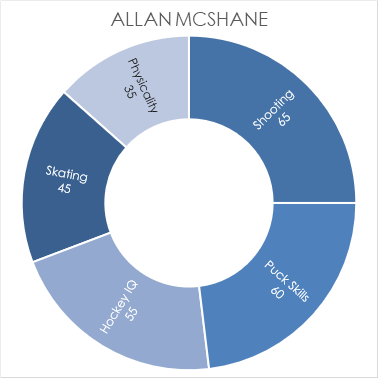 “Strong playmaker with excellent vision that can extend possessions down low thanks to his strong balance and puck protection. McShane is a threat in open ice because he always seems to find the open man with the best opportunity to score, but he frequently turns seemingly harmless puck battles in the corner into quality chances for his mates.” – Steve Kournianos (The Draft Analyst)

“While McShane lacks an explosive first step and high-end speed, he navigates around the offensive zone because of his shiftiness, the ability to go undetected and excellent hockey IQ and anticipation. Once he receives the puck, he has excellent possession skills and excellent patience which allows time for the play to develop. He also has underrated strength despite being a “smaller” forward. Fear of battling along the walls or driving to the net with or without the puck does not exist in McShane.” – Dominic Tiano (OHL Writers)

“I’ve seen flashes of really good skill from him, good playmaking ability. I don’t know if it’s consistently there enough yet. But there’s enough that intrigues me about him to keep him a little higher on my list than a few others.” – Anonymous (OHL Prospects)